Are robots going to replace humans?

Robots are often considered as automatic machines designed to perform boring and repetitive tasks we don’t want to deal with. However, as robots become smarter and more sophisticated they could pose a real threat to most human jobs. Shall we worry?

In 2007 I decided to join ASP (Alta Scuola Politecnica) alongside my Master Degree in Industrial Design at Politecnico of Milan, an experience that has profoundly influenced my perspectives and professional path.

The mission of ASP is to provide society with high-profile graduates combining in-depth (vertical) disciplinary knowledge from their Laurea Magistrale programmes with interdisciplinary (horizontal) skills that are needed to work in a truly multidisciplinary environment. During my experience at ASP I had the chance to collaborate with a multidisciplinary team of talented individuals on a two-year long project whose goal was to explore killer applications for robotics in the domestic environment. From our joint effort we gained meaningful insights on where technology was going and conceptualised and designed Helios.

In this article I share some of the key insights that emerged from the Helios project, alongside more recent thoughts on robotics and the role it might have in future societies.

What is a robot?

There are a lot of stereotypes around the topic, influenced by Hollywood movies and media in general.
Dictionaries define a robot in many different ways but most scientists seems to agree on the following definition:

“A robot is a machine, especially one programmable by a computer, capable of carrying out a complex series of actions automatically.”

A robot is therefore characterised by three main elements.

First of all, a robots is a machine, meaning it is something artificial, not natural or organic, typically conceptualised and designed by humans. The word ‘machine’ also denotes robots as physical artefacts characterised by a hardware component.

Second, a robot is programmable by a computer, running some sort of software that is able to process information and elaborate data perceived by sensors.

Finally, a robot can perform tasks automatically, meaning without being controlled by outside entities, such as human beings. This is normally enabled by an artificial intelligence that allows this machine to sense the environment, assess situations and react accordingly (sense-think-act).

By adopting this definition we immediately realise how wide a range of products  the word ‘robot’ can include. The common representation of robots as humanoids pictured in Hollywood movies or mechanical arms hustling behind cages in factories are just a small part of the robots spectrum. 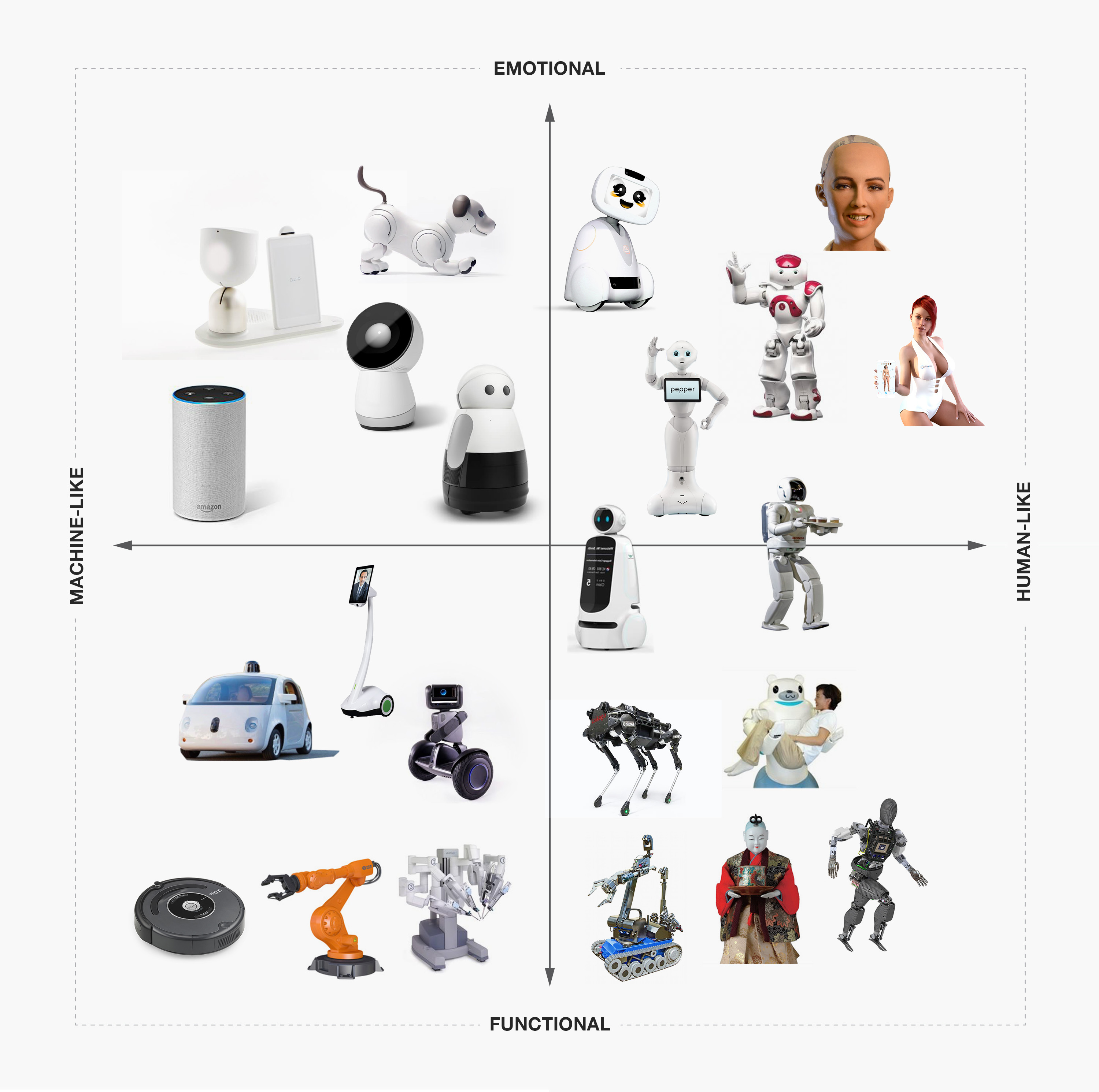 From this matrix result 4 main categories of robots.

ROBOT ENTERTAINERS. On the top left are robot entertainers, robots created to support psychologically and emotionally human beings. User groups typically include those more prone to isolation and loneliness such as elderly, patients in hospitals, and children. Although their look is purposely machine-like, they often adopt ways of communicating typical of humans (e.g. sounds,  body language, voice etc.)

HUMANOIDS. On the top right corner are Humanoids, robots shaped to resemble and act like human beings. They are typically created to support and even replace humans in doing what we do best: emotional work. Good example of this category are Sophia, the conversational robot developed by Hanson robotics, the sexbots by Realbotix, or numerous androids developed in Japan.

SPECIALISED ROBOTS. On the lower left of the matrix are “Specialised robots” created to perform a single or small amount of tasks in a very efficient and precise fashion. A good example of this category is Roomba, the robotic vacuum cleaner that was perhaps the first domestic robot to reach popularity and success, or assembly line robots that tirelessly perform the task they were programmed for in today’s factories.

ROBOT SERVANTS. On the lower right are the so called ‘Robot servants’, robots with more sophisticated motion capabilities, typically modelled after organic beings such as humans and animals, whose goal is to serve humans in accomplishing a variety of tasks. It was a servant the first known robot in human history, the chahakobi ningyō, or Japanese tea doll, shaped after a woman and able to autonomously walk from one side of a table to the other serving tea to the diners.

After having organised robots according to their nature, it should be clear to all of us how rhetoric this question is.

Since their inception, robots have been designed to replace humans at specific tasks and, with further advancements in technology, they will eventually be able to perform better than us most of the existing jobs. This however does not mean that in the future humans will be relegated to the role of useless creatures or even extinguished as a species because of  robots dominance. To understand why, we shall adopt a wider point view and rephrase the question considering robots as part of the bigger category they belong to: Technology

“Is Technology going to replace humans?”

By zooming out on the ‘Robots matrix’, a new one emerges: the ‘Technology Matrix’. This matrix organises existing technologies following two axis:

TRADITIONAL TECH. On the top left are all ‘traditional technologies’ such as transportation, telecommunications, computers etc. These are technologies that enhance our ability to move around places quickly and efficiently, to communicate with people on the other side of the globe in real time, to make complex mathematical calculations almost instantaneously.

ROBOTS. On the top right we have robots, in all their forms. As we have discussed, robots are autonomous machines created to replace humans at accomplishing specific tasks. Also defined as a “physically embodied artificial intelligence” their unique capability to move in space and act on the physical world made them the first type of technology to replace certain types of human labour.

SUPER-HUMANS. On the lower left are wearable and implantable technologies designed to enhance human capabilities. This technology category, still at its infancy, is facing ethical considerations as its development will likely increase even further the gap between the rich and poor. If not regulated, these innovations will in fact turn the lucky ones who can afford them into ‘super-humans’ with for instance enhanced brain performance, ability to read others emotions and manipulate them,  or even increased physical abilities.

BIONICS. On the lower right are those technologies that replaces human capabilities and are close to the human body. These technologies typically target people with disabilities that need to recover  basic body functions. Good examples are bionic prosthesis such as an artificial arm directly controlled by a person’s brain, or a hearing aid. Further below are devices partially implanted within the human body, like cochlear implants, or fully implanted, like pacemakers.

Technology in its development have proven to have a dual role: one meant to replace us, the other meant to elevate us. These two balancing factors will likely continue to characterise future innovations and be a key for human progress.

“Humans and technology will merge into a single cohesive entity, whose constituting parts will be fluid and indistinguishable.”